Bella (born October 28, 2011) is an English Bulldog and Michael and Bridgette's second dog, and a minor character in the Angry Grandpa series. She is frequently featured on the KidBehindACamera channel.

Bella was born on October 28, 2011, in South Carolina. Bella was adopted by Michael and Bridgette in January 2012. Her first appearances on YouTube was a vlog uploaded on 15 January called Meet Our New Dog. Bella spent the 2 months of her life in the Old Trailer with two other dogs: the late Lazy and Rocky. When Michael moved into an apartment with Bridgette, Bella and Lazy went with them.

Bella currently lives in Michael and Bridgette's house, along with Clyde, Bleu and Marlin, & Felix. But Lazy passed away on July 3, 2018.

Bella is the most aggressive of the pets, and will attack on command of Bridgette or Michael. She occasionally gets into fights with the other dogs - particularly Lazy. Even though she is aggressive at times, she likes to be with Angry Grandpa and lay on his lap, even though he is afraid of her.

On July 25, 2018, Bella was rushed up to the vets, because she wasn’t eating at all and then started to vomit all night. They later found out that Bella had a intestinal obstruction and an inflammation in her oesophagus. She has been put into care at the vets for 2 days as of July 27, 2018.

In the vlog HEARTBRAKING NEWS Michael announced that Bella may have cancer again.

On March 11, 2019, Bridgette uploaded a video where Bridgette threw a piece of flat cheese at Michael to try and recreate a viral video, and she threw it at Michael near his face and Bella wen't for the piece of cheese and nearly bit Michael in the face in the process, the video went viral and gained 185k Retweets and 578k Likes on the video.[1]

She made her first appearance when she was adopted in January 2012 in a video uploaded to KidBehindACamera. Since then, Bella has appeared in almost all of the more recent KidBehindACamera videos as well as a few on the TheAngryGrandpaShow channel and on Bridgette's channel. 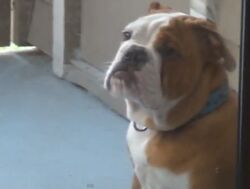 Bella in the Car!
Add a photo to this gallery
Retrieved from "https://angrygrandpa.fandom.com/wiki/Bella?oldid=31064"
Community content is available under CC-BY-SA unless otherwise noted.