Bleu and Marlin are Michael and Bridgette's pets, the others being Bella, Clyde and Felix.

They were first featured on SURPRISE! They were brought in on July 20, 2018, seventeen days after Lazy died.

Originally they were only going to get one but when Jenny went to get them she couldn't separate them.

As of the vlog "I Had A Dream About Grandpa..," their names were revealed to be Bleu and Marlin. 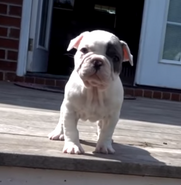 Add a photo to this gallery
Retrieved from "https://angrygrandpa.fandom.com/wiki/Bleu_and_Marlin?oldid=31036"
Community content is available under CC-BY-SA unless otherwise noted.