Angry Grandpa when he gets mad or breaks stuff, being ignored,

Bridgette Nicole West Green (born August 25, 1993) is the fiancé of Michael Green and the mother of their daughter Mia. She is one of the main protagonists in the Angry Grandpa Show.

She appears in almost all of the Angry Grandpa videos made from 2010 onward, and she also has her own YouTube channel, BridgetteWest. However, she rarely uploads videos.

When the main channel (TheAngryGrandpaShow) reached 200,000 subscribers, she was told by Grandpa to get a white gown, gloves, and tiara, and to go eat with Grandpa at Olive Garden. She refused to do the video. Michael claims that the reason why she didn't do it is because she was diagnosed with ovarian cysts and had to take medications which gained her weight, causing her to feel embarrassed. However, many fans did not buy this reason and continued to reprimand her for not doing the video. Bridgette also made an excuse that she couldn't found an affordable gown to buy and she doesn't want to buy something cheap as she feels the fans would feel cheated if it weren't as humiliating as possible. However, she deleted this update video on her channel, and there are rumors that a fan offered her a princess gown for free but she declined. She has yet to go through with the video and it's unlikely that she ever will, especially since Grandpa is now deceased.

In early August of 2016, Michael addressed an incident that a fan took a picture of him and Bridgette at a Wal-Mart in North Charleston and posted it on their social media to hurt their feelings about their weight gain. They are both aware that they are overweight, and while Bridgette is not affected by the hate, Michael is more offended at the fact that people would say this to a woman. He was afraid that Bridgette would have been socially upset to where she would never go out, and he again explains that she was diagnosed with PCOS, which is cysts forming in her ovaries. The medication messed with her hormones causing depression, temporary alcoholism and excessive weight gain. According to Bridgette, she has gained nearly 100 pounds since her diagnosis, and is not affected at all by her haters. However, Michael is actually insecure about her obesity despite the fact that people already know that she's obese.

On December 15, 2016, Michael told a Throwback Thursday story in his vlog about Bridgette's arrest over three years prior. A blackmailer named "Broccoli Ron" had threatened Michael to pay him money or he would post her mugshot online. Michael ignored his threats, and allowed the mugshot to be posted publicly.

The arrest occurred in June of 2013, a few days after Michael's birthday. Michael had been recording a rap song late at night to help his depression, however he repeatedly messed up the song, causing him to get angry. Eventually, Michael screamed so loudly that it could be heard across the apartment, waking up Bridgette. Bridgette freaked out and the two began to argue. Shortly after, Michael left the apartment, with Bridgette continuing to yell at him. A knock was heard at the door, which Michael ignored at first thinking it was just the neighbors, but then he heard "North Charleston, open up!".

Michael panicked, realizing that it was the police. The police asked Michael if Bridgette was assaulting him, to which Michael said no. Bridgette, still angry, denied that she ever hit Michael. Bridgette yelled "Fuck the cops" and Michael threw a candle at the fridge, but the cop thought Bridgette did it because when their dog Bella was startled, she clawed Michael's neck. The police handcuffed her immediately. Michael tried to convince the cop that it was the dog's nails and not Bridgette's, but the cop didn't believe him. This caused Bridgette to go into a fit of rage while being handcuffed, which convinced the cop that she "did it". A few hours later, she was released and the charges were dropped due to the lack of evidence.

On March 19, 2019, a video was published on TheAngryGrandpaShow revealing that Bridgette was officially pregnant. According to her, she was about 4 weeks pregnant, which caused Michael to break down crying at the fact he was going to be a father. Bridgette even commented stating that she went to the hospital to confirm that this was accurate. Many fans, however, were not convinced and thought it's a prank, despite Michael posting that it is not by posting comments on the video and showing pictures of Bridgette's multiple positive results. Michael said in a vlog that the name of the child was going to be Charles Marvin Green IV after Angry Grandpa if it was a boy.

Bridgette might be pregnant again sometime in fall unless her and Michael's next child would be a boy, all that will probably be revealed by 2021.

Walking out on Michael

There are some reports about Bridgette walking out on Michael because of the drama since the beginning of 2013 concerning the fight over Grandpa's cable bill in a video called FAMILY MELTDOWN.

FAMILY MELTDOWN - Because Bridgette refuses to help Grandpa pay the $350 dollar cable bill, leading her being attacked with rages by Grandpa and Jennifer.

SURVEYING THE DAMAGE - Because Michael sets Bridgette's anger up by not telling her about what happened to her iphone he accidentally broke, and let Grandpa pushed him over with the destruction in the wrestling room the next day after that.

OUR SECOND THANKSGIVING - Because Michael has been letting Grandpa piss him off way too much. Michael, too, lets himself get pissed off also way too much in recent videos, leading to treat Bridgette like shit or take anger out on her. When she got back from her mom's house, more drama ensued for two days. 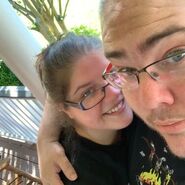 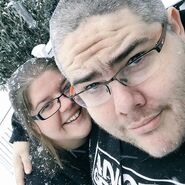 Mike and Bridgette
Add a photo to this gallery
Retrieved from "https://angrygrandpa.fandom.com/wiki/Bridgette_West?oldid=32405"
Community content is available under CC-BY-SA unless otherwise noted.