Charles Marvin "Charlie" Green III (born December 2, 1982) is the oldest of Angry Grandpa's children, the others being Michael, Kimberly and Jennifer.

Charlie was first mentioned in the first video, The Old Christmas Rage, with Grandpa saying "Charlie ain't sending nothing [sic]." and would make rare appearances, most notably the videos where Grandpa visits his mother's grave and in another where he and Michael pester him on Father's Day. He also appears in My Brother, a video showing Michael and Bridgette giving him a dog, Pumpkin. He was then not seen for several years but was occasionally mentioned in his brother's Throwback Thursday stories. Charlie's appearances became much more frequent in videos in 2015 when he moved into his father's new house. He was involved in multiple pranks and many vlogs. It was at this time that he started up his own YouTube channel, "Charlie Chill." In August 2016 Charlie suddenly disappeared. Many fans speculated that he had moved out, but it was later confirmed that he was in jail for not paying child support. He returned in November 2016. Charlie's appearances became even more frequent when he moved into Michael and Bridgette's pool house.

Following the LSD Incident on 29 June 2017, where he got really drunk which resulted in him causing major damage to Michael's property and allegedly assaulted his girlfriend, Bridgette West, he was disowned from the Green Family. However, in mid-August 2017, it is revealed that, after Charlie's court case, he apologized to Michael on Twitter, and Angry Grandpa privately, but that was soon diminished after Charlie said some nasty things about Angry Grandpa.

Charlie and Mike reunited during Angry Grandpa's memorial, and he made some minor appearances in a few videos. Shortly after the death of Angry Grandpa, he and Michael were willing to put the past behind them and repair their brotherhood. However, on January 29th, 2018, Michael announced that he has cut ties again with his brother after Charlie went on a vulgar Twitter rant, assuming he has gone drunk again.

Since he had been disowned, Charlie has been dating and living with his girlfriend and YouTuber Erica Roland for two years. Together, they run their channel 'Travelz Together' which features many urbexing videos. They later changed the channel name to 'The Outsiderz'. 'The Outsiderz' ('Travelz Togehter') also got terminated in April 2021. In December of 2020, Charlie has got himself a full-time job and has been doing better. During this period, he is now finally sober and stayed off the drugs since June of 2020 after realizing all the bad things he has done to his family over the years.

On the 29th of June 2017, while high on LSD and intoxicated with alcohol, Charlie uploaded several porn videos to his YouTube channel and then destroyed the pool house. He was found running around the yard naked by Michael, who called the police. Charlie was taken to hospital due to severely burning his finger but later released. He returned to the house, where he allegedly punched Bridgette twice and threatened Michael with a shard of glass from a mirror he smashed earlier. He was arrested, and Michael expressed a desire to press any charges he could. Michael has also stated that he and Charlie are no longer brothers and he never wants to see or hear from him again, saying "If I die of a heart attack I don't want you at my funeral - I mean that wholeheartedly."

Despite this, Michael still felt bad for Charlie. Michael and Bridgette paid for a hotel for Charlie to stay in for a week, with the hopes of him getting the help he needs. However, Charlie repaid them by posting accusations about the family, such as bestiality, incest and child molestation. Michael was disgusted and decided not to pay for his hotel room for the next week. It was then revealed by Kim and Jennifer that Charlie had allegedly raped them when they were children. Michael was horrified and stated that Charlie was disowned from the family for good. Angry Grandpa, who previously had expressed sadness at Charlie's actions and hope he could change, also now refused to acknowledge him as Michael's brother.

AGP became heavily depressed following Kim and Jennifer's revelations and didn't eat for a week. As a result, he was admitted to hospital on 4 July, where it was discovered he has kidney stones, a small hernia, and cirrhosis on his liver. Michael completely blames Charlie for this. Due to the stress it causes Grandpa, Michael has finally stated that he will not be mentioning Charlie's name in any videos ever again as well as anyone else featured in the videos to never mention the name "Charlie" around him or in his household. 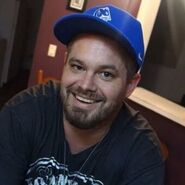 Charlie Green during his LSD incident

Charlie showing a picture of his Daughter

Charlie, Jennifer and Michael in a old family Photo

Retrieved from "https://angrygrandpa.fandom.com/wiki/Charlie_Green?oldid=37707"
Community content is available under CC-BY-SA unless otherwise noted.