Read more at the separate article for Cooking.

"You wanna cook with Grandpa, all you need is a goddamn hammer and a pound of bacon! HAHAHAHAHAHAHAAAA!!!"
— Angry Grandpa

Cooking with Grandpa (formerly Grandpa's Kitchen) is a segment uploaded on the GrandpasCorner channel. Michael started filming his father cooking in 2011.

In each video, Grandpa demonstrates various recipes, many of whom he invented himself. Each time a video ends up in a breakdown, it gets uploaded to the TheAngryGrandpaShow channel.

Grandpa is known to have abnormal cooking techniques. His signature ingredient is bacon.

A new title card with the famous quote in the background has been in use since 2012, but is absent in more recent videos. 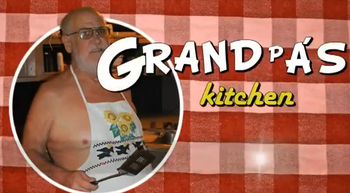 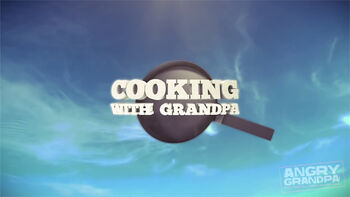 New title card
Add a photo to this gallery
[[Category:Topics]
Retrieved from "https://angrygrandpa.fandom.com/wiki/Cooking_with_Grandpa?oldid=29163"
Community content is available under CC-BY-SA unless otherwise noted.