Felix (June 20, 2014) was an adopted cat of Michael and Bridgette which they adopted at the Charleston Animal Center.

When Felix first meet the dogs, he didn't really seem to get along with them as he hissed and scratched at them. He seems to like it at Michael and Bridgette's house.

Since Angry Grandpa is terrified of cats, Michael convinced him to come over to check out his new dog. Upon arrival, Angry Grandpa made himself at Michael's place while waiting for Felix 'the dog' to come over and meet him. After Michael successfully grabbed the cat from running upstairs, he picked Felix up, put him on Angry Grandpa's lap, and as soon as Angry Grandpa found out that it was a cat, and going through a series of cat-related pranks (smoking catnip and drinking cat water afterwards), he became so afraid of Felix scratching him that he said he wouldn't come back there ever again.

He was scared the time he moved along with them to the new house in 2016. 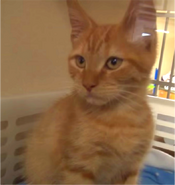 Felix in the adoption center. 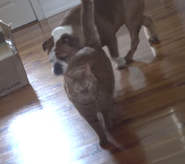 Felix on the landing
Add a photo to this gallery
Retrieved from "https://angrygrandpa.fandom.com/wiki/Felix?oldid=35418"
Community content is available under CC-BY-SA unless otherwise noted.