Amy (For talking shit about her, Issac, Other Tina and her family)

Jennifer Renee Green (born November 6, 1983) is the second oldest of Angry Grandpa's children, along with being the mother of Jay, Johnny, Jacob, and Jimmy.

She is the sister of Michael, Kim, and Charlie.

Jennifer Green is 5'5'' according to her streams.

Jennifer is seen in the very first video (which took place in 2007) where Angry Grandpa's telling her two children (Jay and Johnny "Born at the time before Jacob and Jimmy") that Santa is not real. ( Famous video. ) She was frequently seen during 2010-2011 visiting the Green Household, but appeared less and less (along with her kids) during early 2012. She became a more frequent character in 2013.

She's currently unmarried, having divorced in 2006, but is involved in a relationship. In 2013, due to lack of a job and financial support, she and her kids were seen staying at Grandpas new trailer. She also stayed with Michael at his Apartment as seen in a few videos on KidBehindACamera after. She moved out on her own in 2014, leaving her kids to stay with her father "Angry Grandpa" until she could get her life back on track. She would often visit and check up on them. In 2016, AGP questions "Who let's you live here?!," so she may have lived with him once more.

She replaced Charlie in 2017, after he was removed from the family unit. In Michael's vlog WE HAVE BAD NEWS... he gets a call from AGP telling him that Jennifer was severely burned after an aerosol can exploded in a burn pile. She was rushed to a hospital and later transferred to a burn unit. She received skin grafts to her body and is recovering well. When AGP passed away in December of 2017, her children came back to live with her once more.

She may not upload a lot on her channel, but she does stream quite often. Usually 3 times a week at least. Some of which she privates or deletes afterwards. 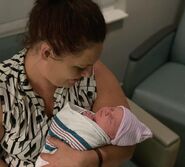 Add a photo to this gallery
Retrieved from "https://angrygrandpa.fandom.com/wiki/Jennifer_Green?oldid=29475"
Community content is available under CC-BY-SA unless otherwise noted.