Lauren Davi (born September 18, 1985) was the fiancé of Angry Grandpa until his death on December 10, 2017 and was the future step-mother to Michael Green, Jennifer Green, Kimberly Pratt (and Charlie Green, who is now disowned). As of March 6, 2018, she has decided to move back near her family as her grandmother's health declined.

She is not very fond of appearing on camera, though she seems to slowly get used to it as she began appearing in more videos. She sometimes will film videos as well.

Lauren is a calm, quiet and kind woman who is a gamer and cares a lot for Grandpa. Lauren, at first, did not like to be filmed. But as time went on, she made more appearances in videos and even made her own YouTube channel where she makes videos of her life and livestreams video games.

Her Relationship with Grandpa

The first relationship between Lauren and AGP was not successful. Michael and Bridgette set up a reunion between the two by contacting Lauren and getting her to agree to fly out. Bridgette and Michael took AGP to the county fair and "coincidentally" ran into Lauren. The reunion went well, and they rekindled their romance.

She falls victim to constant threats by Grandpa to "pack her shit and get" if she tries to take his cigarettes away, or goes along with a prank being played against him. Michael teases that he pays her to stay, but she and everyone around take it as the joke it is intended to be.

On March 3, 2018, Lauren was taken to the emergency room and then hospitalized, and a day later it was revealed that she had a bad kidney infection. 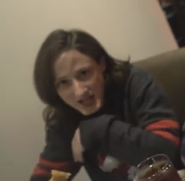 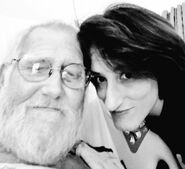 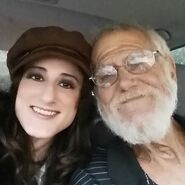 Add a photo to this gallery
Retrieved from "https://angrygrandpa.fandom.com/wiki/Lauren_Davi?oldid=29003"
Community content is available under CC-BY-SA unless otherwise noted.