Lazy (December 29, 2009/July 4, 2010 - July 3, 2018) was one of Michael and Bridgette's pets, the others being Bella, Clyde and Felix. He was featured frequently on the KidBehindACamera channel and also had his own channel with Rocky called "LazyAndRocky". He seemed to be Bridgette's favorite dog, while being mostly disregarded by Michael. He passed away on July 3, 2018 from complications of heart failure. Michael posted a video on his channel called "Goodbye Lazy (RIP)" announcing his death. He was the best boy and we love him so much.

Lazy lived in Trailwood for the first year of his life. In 2011 he was abandoned by his owners, who left Trailwood after rumors began circulating that Boeing was going to purchase the trailer park. Lazy was later found by Bridgette, Michael and Angry Grandpa wandering near their trailer eating garbage on July 4, 2010. Over the next few months, Lazy was nurtured back to health by Bridgette.

Lazy lived with Bridgette, and then with Michael when they moved into their first apartment together. Lazy lived alongside other dogs Bella and Clyde, and cat Felix. Lazy was known to occasionally fight with Bella.

It was revealed in a vlog on May 23, 2018 that Lazy had been diagnosed with congestive heart failure and prescribed medicine. Bridgette was worried about his health. Lazy passed away on July 3, 2018. Michael announced it in a tweet, with Bridgette and Kim also tweeting about it. He was 9 years old, and died the day before the 8th anniversary of meeting Bridgette.

On July 3, 2018, Michael used The Angry Grandpa page on Facebook to announce that Lazy has passed away. His quote says "Today we lost Lazy. I can’t begin to express how profound of a loss this is. Not only did he sleep with Bridgette and I every night for the last 9 years but he was Bridgette’s shadow. Her best friend. I will miss you buddy. Sleeping won’t be the same again.". Lazy went to get a tooth extracted, and doctors put him under "heart-safe" anesthesia, but as soon as he was put under, he stopped responding. 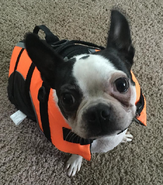 Add a photo to this gallery
Retrieved from "https://angrygrandpa.fandom.com/wiki/Lazy?oldid=31039"
Community content is available under CC-BY-SA unless otherwise noted.