The Obsessed Fan or Phillip is a minor character that has appeared on TheAngryGrandpaShow. It was revealed later on that he is the boyfriend of Morgan.  He teamed up with Michael on a prank to act like a stalker to Angry Grandpa, such like peering into the blinds and looking through Angry Grandpa's van. 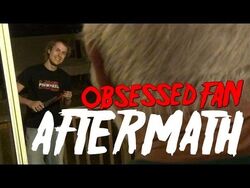 "THE OBSESSED FAN AFTERMATH" title card
Add a photo to this gallery
Retrieved from "https://angrygrandpa.fandom.com/wiki/Obsessed_Fan?oldid=31084"
Community content is available under CC-BY-SA unless otherwise noted.