RIP ANGRY GRANDPA is a video uploaded to TheAngryGrandpaShow channel on December 10, 2017. In the video, Michael explains how his father had passed away. The video has 10.5 million views as of July 2018.

Many YouTubers, including Jesse Ridgway of McJuggerNuggets and Boogie2988, have paid tributes to Angry Grandpa, both by videos and tweets.

Controversy arose after YouTuber MaximilianMus uploaded a video titled, "KidBehindACamera is trying to profit of Angry Grandpa's death", where he claims that Michael is exploiting Grandpa's demise by leaving links to his merchandise website in the description. The video has a lot of dislikes, but the majority deem it is a shameful act. The bickering continued, and since the video, Michael has not answered or removed the link in description. Original upload was removed, but a re-upload exist. Unfortunately the re-upload was deleted at some point. 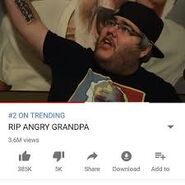 This is the thumbnail of the death announcement video.
Add a photo to this gallery
Retrieved from "https://angrygrandpa.fandom.com/wiki/RIP_ANGRY_GRANDPA?oldid=31067"
Community content is available under CC-BY-SA unless otherwise noted.