Not to be confused with Angry Grandpa's former neighbor.

Tina Marie Sharp Green (born January 4, 1964), often referred to as Grandma) is Angry Grandpa's ex-wife and mother of Charlie, Michael, Jennifer, and Kimberly. She is sometimes referred to as "Angry Grandma" by Michael. She was the main antagonist turned tertiary antagonist of the series.

Tina was frequently seen in the beginning of the 2008 to 2012 batch of Angry Grandpa videos, and made sporadic appearances in the 2013 to 2015 batch of videos. She's often been subject to verbal and even some very minor physical abuse from Angry Grandpa, mainly due to her feeding the cats, much to Angry Grandpa's hatred. Another cause of the abuse was her being irresponsible with money, and spending it on her obsession with Elvis. She's a main person in the family, but has had some fairly minor roles throughout her appearance, usually sitting on the couch or sleeping. She also assisted Michael with his pranks several times. She divorced Angry Grandpa after years of verbal abuse and disrespect, as indicated in the video Angry Grandpa Is Single, where Grandpa states that he is glad that Tina is gone. Afterwards, she lived alone in another trailer in Summerville and her son Michael would invite her for dinner sometimes. She has a cat named Princess. She had a boyfriend named Gerald, however, they broke up. After Gerald, she had another boyfriend, who, according to Grandpa, is a crackhead. On one occasion, Tina left her daughter Jennifer's kids with him. After Grandpa noticed, he intervened and picked them up, vowing to never have them around her again.

In August of 2015, she moved closer to Kimberly and her granddaughters in New York. There are more videos of Tina on Kim's channel, The Pratt Pack.

In 2018, she moved back to South Carolina into Angry Grandpa's house with Jennifer & her grandsons. 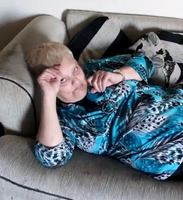 Tina watching cartoons at Grandpa's trailer in the prank GRANDMA'S BACK! 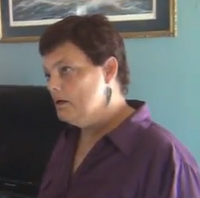 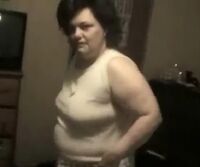 Tina in the old trailer

Tina holding Grandpa's Urn
Add a photo to this gallery
Retrieved from "https://angrygrandpa.fandom.com/wiki/Tina_Green?oldid=29655"
Community content is available under CC-BY-SA unless otherwise noted.